After gaining access to the new space we set about actively working out the floor layout using ticker tape.

The overall impression is that the new space is large and to allow for growth the area of the workshop has been increased, the workshop also needs to be separated fully from the space (due to noise, dust, etc).

The other areas of the space are aiming to be more open plan and adaptable unless they have a dedicated function – we are looking as much as possible to incorporate storage into the design of the place – a tidy space is a functional space, get your thinking hats on for any creative options! 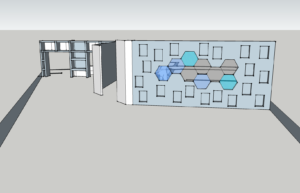 We are hoping that members will contribute as much as possible to the design and renovation of the new space so feel free to start drumming up ideas for sub projects that could be executed. I.e. Have a great idea for that dividing wall? Own the project! Start a google group thread or setup a time to meet and discuss it with other interested people!

Hopefully these sub projects can then pool materials and transport requests with other projects, getting many elements of the build going with less waste.

Phil’s blog over at http://stuffphilmade.tumblr.com/ covers most of the particulars so far in the new space very well. Thanks Phil et al.!

We are still working on making the new space ‘safe’ for members to visit more regularly, this includes:

Regular roundups can occur every Tuesday on the open night for people who miss the online communications.

Getting pictures of the build process will always be great!

This entry was posted in Blog, LHS Update. Bookmark the permalink.