I’m writing this because it appears we’re not the only ones to suffer from this problem, but there’s little information out there, and it initially had most people I asked completely baffled. Martin Raynsford suggested the problem was most likely more widespread than I thought and that it’d be really useful to get what I’d learned out there for the benefit of everyone else, so here we go.

We were suffering from strange variable power issues on the laser cutter. In some places it would cut with no problem at all, in other areas of the bed the power seemed to be far lower.

By adding a spot of tape to the mirrors on your laser you can see exactly where the beam is aligned by firing some test shots. You should start from the mirror closest to the laser tube and work out to the final mirror before the focusing lens. Out cutter showed the alignment was good right up to the final mirror when everything seemed to diverge. If you fire a test shot near each corner of the bed you should get something like this:

Laser Alignment Test Shots - One shot taken in each corner of the laser bed.

Taking a closer look at the end result we can see that 3 spots are clustered together and nicely central within the aperture in front of the final mirror, but the fourth is very low in comparison – this will lead to a reduction in the laser power at the front right of the bed: 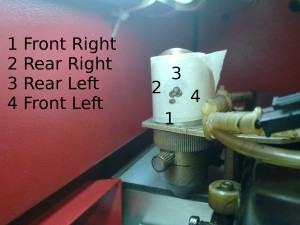 The results of the test shots.

Since everything runs on rails it’s not possible for the laser head to actually move up and down (in this case it’s too high, resulting in the low appearance of the spot) so what’s the cause of the change in alignment? It turns out the desk on which the laser sits has bowed slightly under the weight of the laser cutter resulting in a slight twist to the entire machine – so it’s not the laser head that’s high, it’s the entire front right corner of the machine.

The solution is surprisingly low tech – put a wedge under the appropriate foot to neutralise the twist, and re-check your alignment, you should find that things are improved, you may wish to experiment until you’ve got everything nice and square.

Maybe adjustable feet would be a useful lasecutter mod.

Hopefully this will save people hours of headscratching trying to diagnose similar problems. Happy laser cutting!

This entry was posted in Kit and tagged alignment, cutter, laser, ls3020. Bookmark the permalink.