Some time ago I presented my wife with a shop-bought wind chime and a promise that I could solarize it to make it ring whenever the sun came out. I’ve made these “sun chimes” before and in the depths of a British winter a cheery ringing to announce the sun is lovely. Its a nice project and (give or take a few months spent at the back of the workbench) – eventually turned out as planned.

At the heart of a sun chime is the solar engine – the circuit that takes a trickle of current from the small photovoltaic cell and stores it until there’s enough to kick a motor, which somehow sounds the chime. Solar engines are a staple of BEAM robotics btw and to find out much more see solarbotics.net for many variations. For this project I wanted to use a new engine I’d spotted which uses all discrete, common components. In fact it would be completely feasible to scavenge all the parts out of an old radio, VCR or most consumer electronics. The engine has its own write up: Instructables.com – The Easter Solar Engine. The unique feature of this design is the diode chain; you can tweak the optimum trigger voltage for the motor and load by simply adding or taking away diodes. Picking the main storage capacitor is a balance between how often and long you want the ringer to ring, and how much space you can afford for those bulky electrolitics. 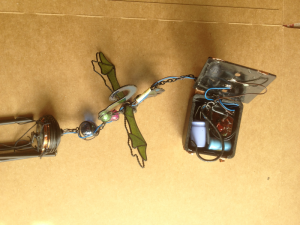 Inside the sun cime

Here’s what I ended up with. Its all jammed on a little bit of perf board with the capacitors taken off the board to give me options for getting it into a tidy enclosure.
I had originally planned to connect the motor up in some way to shake the whole chime to produce the ringing. But this turned out to be a much bigger load for the motor and would have meant either using more solar cells or a stack of capacitors with only a very occasional ring. After fiddling around some more (actually, I put it on the shelf for several months), I finally hit upon tucking the motor into the little wire dome that tops the actual chimes, and driving the ringer directly from the motor itself. This avoids a lot of power loss from friction and its much simpler mechanically – I just suspended the clapper on a scrap of plastic, offset from center and attached that to the motor shaft. 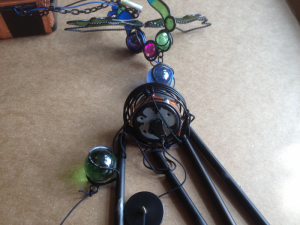 The motor mounted in the chime

To finish it, a small power adapter donated the enclosure for the solar engine – letting me mount the PV cell on the back and clamp the whole thing on the chain which the chime hangs from. I ran the wire from the engine to the motor by weaving it through the chain so its reasonably tidy.
Our kitchen window faces pretty much due south; once in real, direct sunshine the thing was ringing itself crazy. (I had been testing with a 150W halogen light.) I reduced the area of the cell with some tape to get it down to a happy level. Its been up there for a few months now. On a bright but cloudy day it might ring once every 10 or 15 minutes, on a sunny day every minute or so. Because I installed the cell on the vertical, it works best in winter when the sun is low.
Maybe its just me, but creating something joyful that goes on working without needing any further care and feeding – no batteries, no external power – is extremely satisfying. This project is aÂ fun thing to build and its possible to put together extremely cheaply (free even if you can find a solar lawn light to scavenge the PV cell from). Try it, you might like it.
This entry was posted in Projects, Uncategorized. Bookmark the permalink.