As anyone who’s been to the hackspace recently will know, it’s often not the warmest place.Â  This has led to some members becoming a bit obsessed with temperature sensors.Â  Our resident bot already has a temperature sensor, but we had our suspicions about its accuracy, and it doesn’t have a convenient readout. 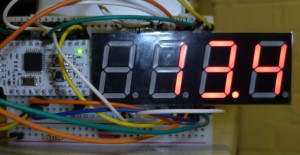 I recently acquired a nice 1″x4digit 7-segment LED displays. Unfortunately these came without datasheet, so the first task was to reverse-engineer the pinout.Â  It turns out they aren’t 5v tolerant.Â  Applying 5v causes the segment to briefly glow orange, followed by the release of magic smoke. After installing some limiting resistors I figured out the wiring for the remaining 3.5 digits!

This combined with a minimus (small arduino-like microcontroller) and a DS18B20 temperature sensor gives in a handy self-contained temperature readout.Â  About the only notable oddness is I chose to multiplex round the segments rather than across the digits.

This all seemed a bit too easy.Â  We’ve recently had a big pile of discrete logic chips donated (mostly 74 series).Â  A digital temperature sensor seemed like a reasonable project to make use of them.Â  i.e. replicate the device above without using a micro-controller.

The design is constructed as follows:

A few issues encountered along the way:

There are two multi-turn potentiometers for adjustment.Â  The first sets the zero point via the ADC negative input.Â  The second forms the potential divider with the thermistor, and allows the scale to be adjusted.Â  While the temperature response is nonlinear, within a small range (say 0-30Â°C) it’s not too far off.

The finished build spans two and a half large (~1200 hole) breadboards, and runs off a 5v supply.Â  It displays positive temperatures to within about a degree.

Update: A bit of rewiring and it now fits on a single (large) board. 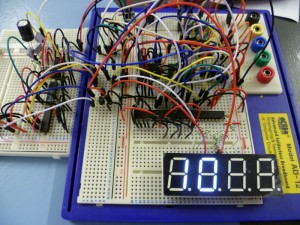 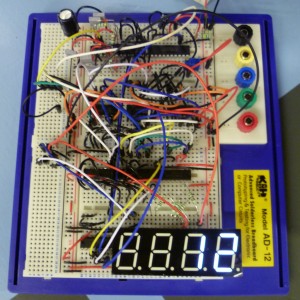