We’ve had a busy couple of months since my last update, with more new faces (more members are always welcome, there’s still plenty of room!) and some great progress on one of our larger projects. 18th/19th of August brought OggCamp 12 over in Liverpool, and myself and Martyn were in attendance.

The start of day 1 saw Bob from HacMan arriving with an enormous box of aluminium for Mendel Max 3d printer frames, he was especially pleased to meet me outside as he handed me the box with the comment “It’s your problem now” (It seems Martyn had gone for the biggest practical printer size, and the parts for 2 printers are HEAVY). Martyn’s presentation on 3d printing was well attended, and seemed to generate a lot of interest. We also got to meet Pete Lomas from the Raspberry Pi foundation (he’s a fantastic guy, and apologises profusely for not including mounting holes). My day was loaded with presentations on lots of different subjects (Nanodes, Fignition and Enigma machines to name a few), and ended in the bar back at the Adelphi chatting to Ken Fallon from HPR and listening to Dan Lynch’s band 20lb Sounds (Once they’d managed to get all their gear through the rabbit warren or endless corridors – guys, it was worth the effort, you rock).

OggCamp came to an end on Sunday afternoon after the raffle, where the winner of the tablet top prize insisted it was auctioned, and it raised Â£280 towards OggCamp funds (thanks to the winner of both the raffle and the auction!).

During the weekend in addition to doing Pi related presentations and selling a large pile of Raspberry Pis Pete Lomas was also allowing people to pick through a large pile of “scrap” components, and we’d heard they were to be disposed of, a short discussion with Pete saw an enormous box appear on my desk at work a few days later. We’ve got a lot of sorting and cataloging to do, but once we know what we’ve got I’ll publish a list and if anyone has any requirements for projects then we’ll ensure the components are distributed to people who can make use of them. A VERY big thankyou to Pete and the Raspberry Pi Foundation for this!

Entertainment for the bank holiday weekend was provided by a big pile of bolts, aluminium, and printed plastic parts, it’s a lot like Meccano for adults (or maybe big kids), and we now have this monster: 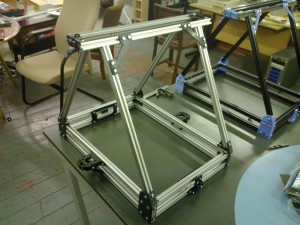 It’s the frame for a Mendel Max 3d printer (I’ve decided it should be named the Mendel SuperMax – it’s enormous). Martyn has a few more components to print (for both ours and his own Max in the background of that photo), and we still need to acquire electronics and motors, but progress is being made, and we’ll hopefully soon be printing our way to world domination.

While collecting some bits for the printer from the Farnell trade counter I noticed that they’ve now got stock of some Raspberry Pi cases. They seem to be pretty sturdy, you can get them in black, white, and clear, and at less than a fiver if you just want something to keep your Pi safe you can’t really go wrong. 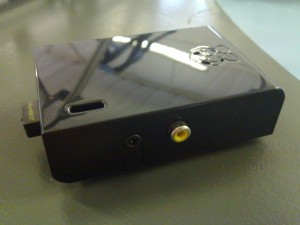 TLDR: OggCamp was great, we’re well on our way to an enormous 3d printer, and Pete Lomas is the nicest bloke on the planet.