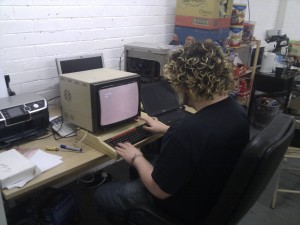 Shinaku,Â decidingÂ to get the BBC Micro working but lacking a monitor cable spent a little while playing with fedora 5.5 and a tv capture card before bodging a BNC test lead into service.

Not properly used in years, the BBC sprang to life and apart from a couple of dodgy keys, seemed to be working absolutely fine. There was an amount of theÂ obligatoryÂ `10 PRINT LEEDS HACKSPACE; 20 GOTO 10` and was just moving onto some far more interesting colour (proper spelling) manipulation when things obviously got far too exiting and in retaliation the Micro set itself on fire and started belching an upsetting amount of constant magic smoke. Interestingly, the program kept running, so whatever component committedÂ Seppuku obviously wasn’t that integral. Time to build an operating table so we can see what’s going on.

In other news, we adopted an old 80’sÂ cabaretÂ arcade table which needs some TLC (and insides) and I spent some more time hitting hte floor with a hammer. Progress, I tells you.

Tomorrow we have a contingent heading to The Harrogate Show, specifically for the Model Engineering andÂ Modelling… should be a fab day out.

This entry was posted in Blog. Bookmark the permalink.