Sphere making on the lathe 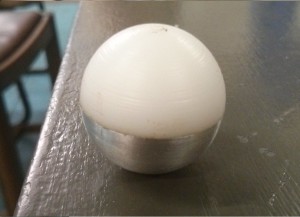 completed sphere- half delrin, half aluminium just because.

A few months ago a few of us went to the Harrogate engineering show. We failed to convince Joran to use his new credit card to buy us a new milling machine but we did all come back with moderate damage to our wallets and new toys/ tools donated the workshop. Chiefly amongst them we have milling tools and a rounding tool for the metal lathe.

With the rounding tool someone asked can you make a sphere and I wanted to prove the answer was yes, kind of. It has to be done in two parts so I made one half of of aluminium and the other out of delrin. Delrin being a self lubricating lathe-able plastic that is relatively tough. Now the rounding tool is simple to use but tricky to get the precise right size for what you want. So the fact that my two halve match up perfectly certainly has some measure of luck involved, the fact it was done by me means there was a lot of luck involved. 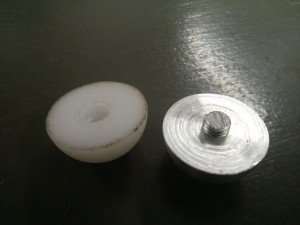 The two halves before epoxy.

The idea was to round off the end of a bar, shorten the bar, drill a hole down the centre it and tread the hole then chop off the rounded end precisely to get a nice hemisphere. So in an ideal world I would end up with two hemispheres of the same size where the threads would line up perfectly so a threaded rod could hold them together. Unfortunately my limited luck and skill ran out leading to an offset of over 1mm. So I drilled out the hole in the delrin so the rod would not touch the side when the hemispheres were lined up and applied lots of exopy resin adhesive. A few hours of drying later and I have a sphere. In time I want to vinyl cut a mask for the aluminium side and acid etch it but for now I have been distracted by another project I hope to post about soon.

Thanks (as almost always) to Nav on helping me on some of the tricky bits.

Want to try working with delrin? We brought some back from the engineering show including some cheap offcuts to play with.

Never used the lathe before? Its a lit of fun even if you don’t have a practical end in mind. Speak to Nav or Aiden for an induction as we want to get more people into using it because we know how satisfying it is to work with.

This entry was posted in Lathe. Bookmark the permalink.

1 Response to Sphere making on the lathe