Pints of water all round! 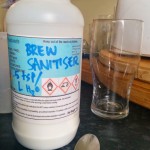 Today saw the inaugural meeting of the Leeds HackSpace “You better believe I’m going to taste all the ingredients” (Lick All The Things!) Brewers and caffeine aficionados society (name to be confirmed).

tldr: Equipment was sterilised, water was boiled and secret ingredients were weighed out to 2 decimal places of precision. Oh -and there’s a good chance we’ve actually made some beer, too!Â  (read more for how it went down)

Kicking off in the customary HackTime((HackTime: Somewhere between 15mintes and 54 years later than you agreed to start, finish or meet.)), BuildTheRobots managed for once not to be the last (Stanto receives today’s Early for Next Week Award) but was still late getting lost finding his own kitchen. After getting everyone together and asking the same questions twice, we were happily on the same page and ready to crack on.

As this was our first attempt brewing, we decided to go for the easy kit form, so here’s what we used:

First you start by sterilising everything. (Boiling?) hot water and a teaspoon of steriliser and clean yourÂ  bucket and stick thoroughly. Also make sure you rinse it well afterwards. Discard this water.

You need to heat up the tin of brewgunk. We laid ours on it’s side in a baking dish and then covered with boiling water. Over the course of 10minutes we kept turning the tin and used the opportunity to boil approximately 4 pints of water. By this point the tin seemed to be cooked through (even temperate, slight discolouration, glistening softly in the afternoon light) and if you’re following along without reading ahead, I should have told you earlier we removed the label.

Brew: The tin was opened and it’s now liquid contents dropped into the bucket. On top of this we put most of the boiling water, the rest of which was used to rinse out the tin (and burn my fingers slightly), everything was all combined in the bucket with use of the stick thing. The stuff from the tin didn’t taste too bad… marmitey with a bitter after. You could almost get away with it on toast. 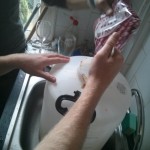 Enhancement: Brew enhancer is basically your sugars and some 21century chemical magic in a bag.We had to wait for the temperature to drop slightly, except I got bored with waiting so stuck the bucket in the sink and applied some cold water to the outside. This also got boring quickly so we started pouring the Brew Enhancer in bit at a time combined with plenty more stick action. 1kg of enhancer for however much we were making, which happily worked out to be the entire packet. The enhancer was a really fine grain, very reminiscent of artificial sweetener and clumped up in pretty delicate structures as it got damp. It tasted of sugar and SuperMalt and I don’t think it’d be unpleasant in coffee. I tried some more to be sure. We mixed more vigorously.

Liquid: After the enhancing comes the watering it down to taste. We pumped for North Leeds flavoured water with just a hint of Roundhay Park; that is to say we used the tap and actually I think it’s piped in from Bradford. With the occasional swilling we ended up with 40 pints of liquid in the bottom of the barrel and a nice frothy froth on top. This didn’t taste as nice as it looked.

Caffeine: During our original planning we had spent some time discussing the best time for adding the caffeine powder and how much to use. I’d naturally concluded that “during all of the stages!” and “until it reaches saturation point!” were the correct dosages, but luckily cooler heads prevailed. Stanto had heard it on good authority that you didn’t want to add it too close to the start of the brew as it could lead to odd if not awful flavours. It was also decided that “enough to kill an elephant” was probably a little on the ambitious side for our first ale.

Whilst on our side of the room we were guestimating and slopping liquid around with a stick, on the other side Stanto was using maths and measuring doses out to within 3 decimal places of accuracy, and calculated 32mg per 100ml of water which should put us on a par with caffeine levels found in Red Bull (other branded gutrotters are available,) and it seems most people should be able to easily make it through over 100 cans before the caffeine levels put you into toxic shock.Â  I have been left 7.360g of caffeine powder which I will mix with water and add to the brew on Tuesday night.

Done (gone and forgot the yeast). And at that point we were done and congratulating ourselves. No rule0 violations and it wasn’t too sticky to walk out. We had decided to leave the lid off our fermentation bucket until Tuesday as the start of the reaction can be quite vigorous with plenty of gas escaping. I’ve elastic-banded a tea-towel over the opening to keep most things out. Someone then asked the question “what’s in that silver packet” and we realised we needed to add the yeast. This gets sprinkled on top of the foamy gunk (think River Calder for reference. For reference to the reference think Ankh Morpoch) and not mixed in as I would have expected. As Joe explained using science words, it starts as a <something> reaction before later becoming… the other sort.

So that’s it. I forget about it until Tuesday, add the powder and then dri— -what do you mean three more weeks? I can’t wait that long for a beer… why didn’t we think of this a fortnight ago?

This entry was posted in Blog, Edible Hacks and tagged Beer++, Caffeinate All The Thing!, Food Hacking. Bookmark the permalink.