Since both the hackspace, and my home are fairly close to the approach to Leeds/Bradford airport, and I’ve always had an interest in aircraft I’ve often wondered what was flying around, so decided that building my own virtual radar system would be an interesting project. 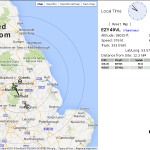 Having installed debian on a spare micro SD card and compiled the software a quick test with the aerial included with the tv tuner proved that the whole setup worked and was happily picking up aircraft approaching the airport, the next step was a better aerial. I opted for a colinear aerial, which can be constructed from nothing more than a length of coaxial cable and some tape to hold it together. Construction details can be found here. The finished aerial was sealed into a length of 21.5mm overflow pipe to avoid water getting into the coax and affecting reception. 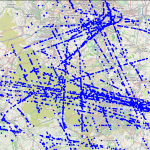 Using an improved version of the dump1090 software with integrated mysql logging gives a number of additional possibilities, a scatter plot of the logged tracks nicely shows the routes in use. Adding extra tables to the database schema to hold aircraft information can allow you to search flights on aircraft type and owner/operator, revealing interesting patterns in the users of UK airspace. 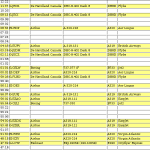 Future improvements include better aerial positioning, the possible addition of extra receiver nodes, and a high gain directional yagi aerial allowing longer range reception in any direction of interest (based on a design from this yagi calculator – details will be provided in a future blog post).

This entry was posted in Projects, Radio. Bookmark the permalink.