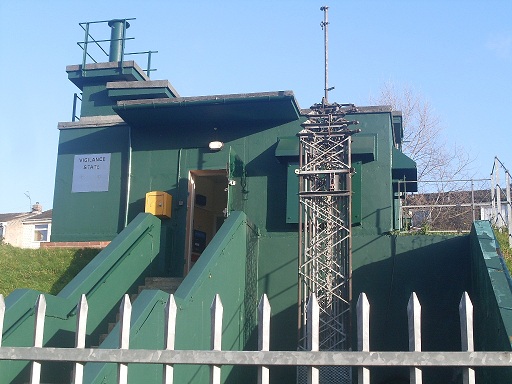 Yesterday, on a brisk but sunny Sunday, a small band of Leeds Hackspace folks caught a train to York and went on a tour round the cold war bunker in Acomb.

The bunker’s oddly suburban location and slightly Teletubbies-like appearance are quickly contrasted when the gate opens sounding a siren until it is shut again, and when it does shut, it clangs ominously behind you. As you make your way up the stairs to the entrance the first thing you can see through the door is a RADIATION poster and the decontamination zone – three sinks with shower hoses attached.

The one hour tour covers almost all of the bunker and starts with a video explaining the history of the cold war and the threat of four minute warnings. After that you’re led through corridors and claustrophobia-inducingly small rooms, past oddly marked cupboards until you reach the operations room, the point of the whole building.

The operations room is where the staff at this HQ would receive and pass on information from the 20 smaller observation posts it managed. Had a bomb been dropped in Yorkshire or Lincolnshire it would have been in this room that staff worked to triangulate the blast’s location and calculate the power of the blast, the radio-active fallout’s spread and it’s impact. 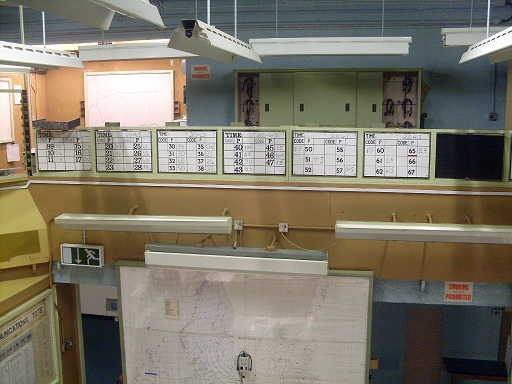 The operations room is a geek’s treasure trove. It has all sorts of archaic bits of kit (including the only AWDREY on display in the UK), huge floor-to-ceiling perspex maps, telephone posts and update boards to relay information coming in from other observation posts. It has the only computer on site. And a wonderful thing called a Bomb Power Indicator made by the General Radiological Company of London – it’s a pressure gauge!

It’s hard to believe that if a bomb had been dropped this tiny bunker was designed to hold 60 people for up to 30 days.

The Cold War can often seem a remote possibility today but ROC No. 20 was in use from 1961 right up until 1992 when it was finally stood down. What’s even more remarkable is that this bunker, and all the others across the country like it, were staffed almost entirely by civilian volunteers.

We left the bunker with lots more photos, copies of the EH guidebook, a meaty tome on the whole history of the Cold War and a desire to be somewhere warmer and less apocalyptic. Which is how we ended up in Evil Eye having a pint and a Sunday roast and then in The Old White Swan demolishing their whisky collection. :)

This entry was posted in Visits. Bookmark the permalink.